Gerhard summarizes the most intense and critical battle the 134th Infantry Division would fight in two short paragraphs, and yet it was this battle which yielded to the Soviets one of their first victories and which would come to symbolize the entire German foray into Russia. The battle for Yelets was the turning point for the 134th Infantry Division; from this point forward it would fight defensive battles and retreat to the west, ever closer to its demise. Surviving records of this period foreshadow the end for the 134th Infantry Division and for the eastern front. The division was by now a fatigued and worn battle unit. Since the beginning of the invasion the 134th suffered 700 deaths in combat, 2,500 men were wounded and sick and 200 persons were missing. Eight hundred horses were dead or missing and another 500 were sick or wounded. And the bitter winter of 1941-42 was just beginning. 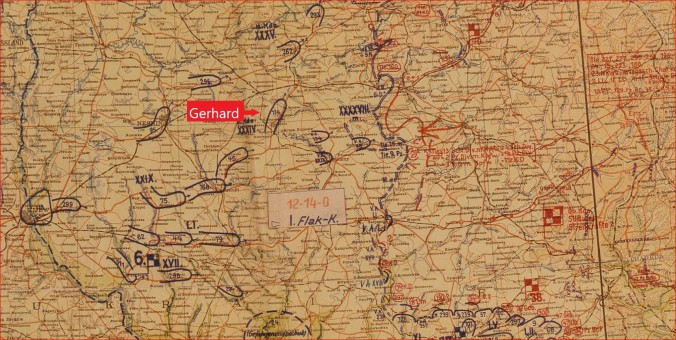 This is what the German army on a winning streak looks like – October 2, 1941

Yelets was essential  to both the Germans and the Soviets. In July, Germany began an intense bombing campaign killing 759 civilians and wounding 517. Germany needed Yelets to protect Army Group Centre’s southern flank in its push to Moscow and for the Soviets, Yelets was a critical transportation hub to supply resources needed in the defense of Moscow.

So when the Germans arrived at the end of a supply line stretched to the breaking point, with two days of food and ammunition immediately available and wearing only summer clothes, the city dug in and prepared for battle. On December 2 a German soldier reported: “Snowstorms…..everywhere it’s blowing in…..nothing to eat. The men warm themselves in a stable where we have set up as our quarters. (We are) sleeping on the cold floor, on frozen straw in the company of chickens, lice, cockroaches, donkeys, pigs, small children and dirt. (What) a beautiful night!”[2]

On the night of December 4, the commanders of 45th Infantry Division lying to the south decided to take Yelets with an ill-advised night time surprise attack. This forced Gerhard’s general, von Cochenhausen, to prepare his exhausted troops for battle on December 5 to protect the flank of the 45th. He divided his forces into two battle groups “Kunze” and “Rhein.” Kunze attacked from the north across mined terrain and Rhein from the west across icy open terrain. Soon Kunze was facing strong resistance and was forced to dig in and halt its attack. At noon von Cochenhausen learned the night attack by the 45th had failed and it was dug in. Now, instead of complementing the attack by the 45th, Gerhard’s division carried the burden of the main attacking force. Its artillery pounded defensive positions and Rhein crossed the rail line five kilometres west of the city and by nightfall, reached the edge of the city.

The next morning both battle groups faced counterattacks on land and in the air and suffered many casualties including the death of Paul Pudelko, the leader of 10th company of the 439th Infantry Regiment. “Medical Sergeant Polte, who froze both his hands while he was trying to bandage Pudelko’s upper thigh wound, repeated the last words of the dying Pudelko: ‘So many are dying for Germany, why should I not die as well.’ With him the 10th Company buried its oldest and most reliable comrade.” This was also where the division first encountered the Katyusha rocket launcher that could fire multiple rockets in a single shot. Despite the losses, they occupied the city by the evening of December 5, 1941.

The arrival of the 45th Infantry Division the next morning permitted a battalion of Infantry Regiment 439, (1,500-2,500 men) to withdraw from the city and move north to assist Battle Group Kunze who awoke to find it had been encircled by the Soviets. The region around Yelets was interlaced with ravines which restricted movement of equipment but that morning Russian infantry and cavalry had stormed out of a ravine surprising Battle Group Kunze.

What the soldiers did not know then was the envelopment was the least of their problems. On December 6, 1941, the Soviet Union unleashed a massive counteroffensive to encircle the entire Army Group Centre. Now the German Second Army, of which the 134th was a part, faced three Russian Armies with the aim of tearing into the southern flank of Army Group Centre and Gerhard’s division lay directly in the path.

For the next two days the division regrouped and prepared to defend its position in Telgino [52°41’32.40″N, 38°21’42.08″E], 13 kilometres northwest of Yelets. “Since the Russians only probed with patrols against the positions in Yelets on December 7, the infantrymen could rest for a few hours. The men fell into a deathlike sleep despite the considerable temperatures of -25 to -30 degrees.”

By December 8 reports of the Russian counter offensive arrived. Gerhard’s sister division the 45th, had been overrun, exposing the southern flank of the 134th. Now the 134th was ordered to destroy Yelets and evacuate to Kazaki [52°38’3.97″N, 38°16’17.65″E]. Lance corporal Haussler described the mood in his notebook thus: “Yelets has been evacuated. The troops are in a depressed mood. Endless columns. An Army retreating in the darkest night. And then – vehicle breakdown! Order from the Commander: destroy it! Unload the baggage to the supply vehicles and then march to Kazaki…..then by Panje sleds to Infantry Regiment 439. Enemy aircraft attacked four times during the drive. Horses and sleds were destroyed…the enemy is everywhere….”

On December 10 mounted messengers delivered orders to all battle groups to withdraw to the winter line, but an orderly withdrawal was no longer possible for the exhausted men. Suddenly the Soviets attacked. One artillery battalion had run out of ammunition and escaped with only its guns, another was forced to destroy its guns before leaving the battle ground. Communication was no longer possible. “Everywhere Russian cavalry and infantry troops suddenly appeared. The front was all around. The villages were on fire. There was noise from all sides. Russian aircraft hurled themselves on the still standing huts in which the remainders of the companies had taken cover.”

By 5 p.m. Soviet forces had surrounded two of the division’s three infantry regiments. Retreat was no longer possible, the only chance for survival was to fight. Gerhard’s division and the overrun 45th were ordered to break out between Livny [52°25’28.65″N, 37°35’58.71″E] and Izmalkovo[52°41’5.29″N, 37°59’8.72″E]. Clearly the commanders at the Army Corps headquarters did not understand the situation. General von Cochenhausen sent his second in command to the Corps headquarters to explain that the 134th could not even communicate with the 45th, let alone coordinate a breakout. The general decided the division should move northwest to gather up its own remnants and the remnants of the 45th.

December 11 was a calmer day as the troops withdrew along the railroad toward Khomutovo[52°51’16.76″N, 37°26’35.73″E]. German airplanes appeared in the sky and dropped small containers of fuel so some of the machines became mobile again. Most vehicles were burned out, destroyed or unfit to drive. That night, what was left of Infantry Regiment 446 showed up tired and hungry after battling enemy columns through ice and snow but there was no food. The Soviets had destroyed the support base at Shatilovo [52°45’25.29″N, 37°47’26.24″E] and all the division’s support services.

A supply column attacked from above.

The next day Infantry Regiment 446 was ordered to recapture the support base but en route to the base, 100 Russian riders attacked on horseback. Infantry Regiment 446 fought back and recaptured Shatilovo and was ordered to hold its position there despite enemy troops spotted in the north and in the south.  Meanwhile infantry regiments 445 and 439 now faced west instead of east, fighting to clear the way for the retreat. While Shatilovo was being held against Russian attacks, the rest of the division restored supply lines, gasoline, rations and fodder for the horses.

This is what the German army on the run looks like. Yelets (Jelez) is on the lower right corner of the map. This is December 14, 1941.

In the next episode we find out what happens to the 134th Infantry Division.

[2] All details regarding the battle for Yelets come from a forum entry by Robert Westby on November 6, 2007. https://forum.axishistory.com//viewtopic.php?f=55&t=129793&start=0&hilit=jelez, accessed April 6, 2018. Author edited details for brevity and clarity.