Whether he said it or not, Gerhard’s ambition was to re-unite the family, but time had taken its toll on all of them. Abram and the sisters had families of their own. Their children were born into the Soviet system and German had become their second language. The box of letters Gerhard left show how difficult it is to emigrate with the entire extended family. From 1970 to the mid-80s travel visas are applied for, then expire and applied for yet again. Permission to emigrate rejected, but finally permission is given. Then indecision. Elders wish to emigrate, the children not so much. 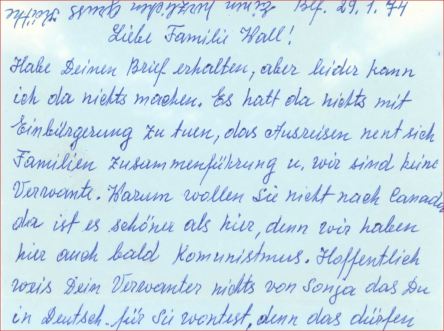 There is no telling what Gerhard might have been willing to do to help his siblings get to Germany. In one 1974 letter Gerhard and a cousin were hatching a scheme to bring Sonja and her family to Germany under the family reunification program. The only problem was that Gerhard lived in Canada, but Sonja and her family wanted to be “re-unified” in Germany. His cousin was not related to the family and could not sponsor them. It would have to be Gerhard. He would have to pretend to be living in Germany, and Sonja would have to believe it too. It is clear Gerhard had initiated the plan, but his cousin in Germany was dubious. “Why don’t they move to Canada, it’s better there, we’ll soon have Communism here,” she wrote. Eventually the sisters, and Abram all made it to Germany, but the letters do not reveal which tactics proved successful. In 1988 Abram and his sisters visited Canada, but it was too late for Gerhard. He didn’t know who they were.

Only Nikolai was still lost. Then four months after Gerhard’s burial, Mary received this letter from Gerhard’s brother Abram:

Have I written that I have found my brother Nikolai? We knew nothing about him from 1937 to this year. I sent Nikolai a picture of Gerhard, Marieche and Sophie, and when he looked at the picture of Gerhard, he pressed it to his chest and said: “My dear brother Gerhard.”[1]

Gerhard’s missing brother had finally been located. His sister Marieche had also communicated with Nikolai:

Nikolai writes he can no longer speak German, nor write in German.

Nikolai has two children, a daughter and a son, the son has two girls and the daughter one girl. They are quite grown up already.[2]

Nikolai himself wrote to his sister Lydia:

I became very excited when I received the letters from Marija, Sophija, Abram and you. I couldn’t sleep. I was filled with great joy and then with sorrowful thoughts. During our lives we were scattered across the world, and then near the end of our lives we are together again. I am very thankful to God for that.

My dear sister, forgive me, I can’t write in German. And I’m weak in Russian too. I would like to tell you something: My wife’s name is Evdokija; I have two children, a son, Wolodja, he’s 45 years old, a daughter Ljuba, 43 years old. My son has two children and the daughter one. So I have three grand-daughters.

My wife and I live in the forest and we have a place there as long as we are able to do something. That’s how it is, but my legs are giving out.  My wife has had an operation on her eyes. We take life as the good Lord gives it. There are no German people where we live. Please write in Russian. This letter had to be translated: my grand-daughter’s teacher did that.

Next time I’ll send a photo of my family. It is difficult to mail letters, we have to go to the city.

This letter was written by my daughter Ljuba. She is here with her daughter. The grand-daughter is on vacation. She’ll take this letter with her and send it from there.

I’ll end this letter and wish you good health and God’s blessing,

The family revelations continued as Nikolai and Abram shared their experiences. From Abram to Lydia dated May 21, 1993 :

Today I received evidence about how our Papa died. Now I know everything about our Papa, where he worked, where he lived, how many times he was arrested, now they apologize for everything that happened. In prison they tortured our father so much until he died. He was in prison two times. The first time was October 1937, he was in prison for two years that time. And the second time they took him was in 1941 and that time he died. He was 60 years old when he died. Our Papa died August 21, 1942.

But I still don’t know everything. Was our Papa together with Nikolai? Nikolai knows very little of our Papa. I believe they may not have been together. I believe Nikolai will tell us everything when God willing we’ll see each other again. But Nikolai doesn’t write to me. I get letters from his children, they are very interested in all of us.

Good day dear sister Lida and children, great and small. We are all in good health and wish the same to you.

Dear sister you have written us three letters and all in German and I cannot read or write in German. That’s how it is, in 58 years I have forgotten all of it.

And you, I haven’t seen for 61 years. I don’t know when you departed from our village. They took our father and me in September 1934. At first we were in Komi ASSR until 1935. Then we moved to Perm and lived there until 1937. We moved to Sverdlovsk and stayed there until 1940. I became very sick and the doctors told me I had to live in a forested area. We moved to a village called Bugri until 1971 and now we are here.

I became separated from our father during the first few days of January 1942. I was at work chopping wood in the forest, when I came home he was not there. I asked my wife what happened, she said the commandant took him and didn’t say where.

After a long time we heard that he was in the Trud Army[4], working on the Sosiwenski Highway. That is also where he died.

We have never received any documentation. And so we survived. Things are better now. I am on a pension and it is enough for us. Please send no more packages or money. We have enough food and clothing.

It would be a joy if we could meet in person, but I am not very healthy.

Stay healthy and God be with you.

There are no more letters from Nikolai. Without Gerhard, the family orbits decayed, the sisters, the brothers all spinning away from the centre on their own trajectories, perhaps never to connect again.

[1] Excerpt of Letter from Abram Wall to Mary Wall, dated December 6, 1992. Sonja had now germanified her name to Sophie.

[4] The Trud Army (Russian labour army): labour battalions, formed in the Soviet Union after the outbreak of war with Germany in 1941, under the authority of army administration. The Army compulsorily conscripted men and women aged 15 to 60 and exempted only pregnant women or those having children not older than 3 years. The mobilized worked in coal mines, refineries, ammunition manufactures, and constructed roads. They were barracked in special camps, where conditions were not much different from these in penal Soviet labour-camps. The largest group in the Trud Army were Germans living in the Soviet Union. Polish citizens were also conscripted, mostly of Jewish, Ukrainian and Byelorussian origin. After the war the Army was disbanded. Source http://www.sztetl.org.pl/en/term/542,trud-army/ See also https://library.ndsu.edu/grhc/history_culture/history/trudarmy.html)