It was in Gerhard’s best interest not to return to Russia. What would he have done to avoid returning home to Ukraine? Some Russian refugees chose death  because they saw no other way out. Gerhard would also risk death, but for the moment he chose survival. He was from Ukraine and might have been safe there had the western allies considered Ukraine a separate country. Only 200,000 out of three million Ukrainians escaped repatriation, according to Marta Dyczok in The Grand Alliance and Ukrainian Refugees.[1] Going home was not an option.

There was a great deal of international “sorting out” that needed to be done after the war. Practically every European nation controlled people from every other nation. People had to be sorted on an I’ll-give-you-yours you-give-me-mine basis. Bilateral repatriation agreements were signed with Britain, United States, France, Belgium, Switzerland, Norway and the Eastern European countries occupied by the Red Army.  These agreements allowed Soviet secret police to operate in the British and American zones with impunity as they encouraged Soviet citizens to return to mother Russia. All will be forgiven, prisoners were told, but frequently kidnapping and murder was needed to motivate those who wished to remain outside Russia. 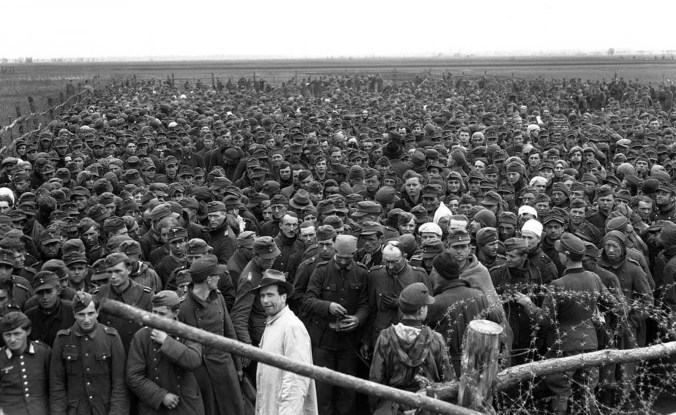 In 1945, the repatriation policy was restricted so “only citizens who had  actually lent aid and comfort or wore a German uniform were  to be  returned.”[2] Clearly Gerhard was still on the menu.

Russian documents refer to Frankfurt Oder camp as Camp No. 69, which also included other barracks and camps. The Horn Barracks at Nuhnenstrasse 40 was used the longest as a collection and transit camp, and it’s likely the NKVD Frankfurt headquarters were also there. The barracks built in 1936 as an observation unit, included four two-storey personnel quarters and between them a single storey administration building. The two rear buildings had flat roofs to carry out topographic exercises and observations. To the west was a large garage complex and to the south a barracks known as Camp Nuhnen. The barracks bordered on the railway line Berlin – Frankfurt – Poland.[3]

Surrounding the camp was a double barbed wire fence built by the prisoners. By May 4, 1945 it was already overcrowded. Prisoners slept in workshops, stables, even out on the parade ground. Nineteen-year-old Gunter Hass said: “In sleep we could forget the hopeless situation and the uncertain future and dream of better days.” Walter Bunt: “We are almighty hungry. We sleep in the sun all day and become flabby. When we arise to fall in, we nearly black out.”[4]

After a cursory medical examination, the first selections are made. Men are organized into groups of a hundred led by German officers who do their best to appease the Russians.

There were no regular meals. Sometimes POWs received a thin watery soup and if they were lucky, some dried vegetables in it. Sometimes just pieces of dried bread for the whole day. Prisoners searched the entire property for something edible. Gunter Knörck thought he was lucky when he found a half sack full of beet pulp and shared it with his mates and all of them were tormented with serious diarrhea. “We have to start from scratch and learn how to survive.”[5] But Gerhard had already learned how to survive.

Gerhard had no intention of leaving Europe, if possible he would get out of the Soviet Zone and then, when it was safe, travel to East Prussia where family friends lived before the war. 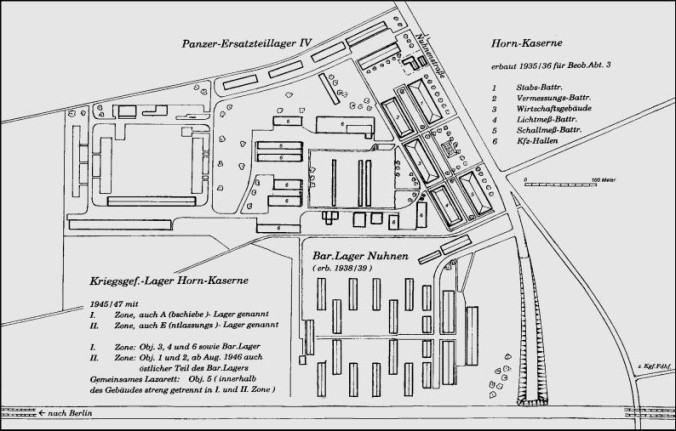 The hope of release was ever present. Rumours abounded that all prisoners would soon be freed. Many were promised to be home by the end of the war. Sometimes the Russians put prisoners on the train for home, but at some stop before they arrived at their destination, they were taken off the train and returned to the camp they had just left. Nervous breakdowns and crying fits were common. Some mornings there would be bodies hanging from the fence, the result of barbed-wire madness, escapees caught in the act.[6]

Gerhard’s survival plan was taking shape. He was not a soldier; he needed to become a refugee.

What Gerhard suspected, Elfriede Welenga[7] already knew. She was 14 years old in 1945, and on weekends she brought her father his lunch. Her father’s job was to bury the dead coming from the camp. It was a hot and dusty August, and a powerful smell lay over the area. Her father told her to be careful where she walked, there were dead people buried here. Rolf Paechnatz delivered the dead from the camp to the mass grave. When the grave was full, they sprinkled the bodies with lime and went back to the camp for another load.[8] Officially the Soviets admitted to 570 deaths within the camp, while East German authorities spoke of 6,500, but a more recent study confirms there could be 30,000 dead soldiers buried in the five-acre site.

It’s no wonder Gerhard stressed the importance of knowing a second language, it had likely saved his life.

[9] “More than seven million foreign workers in Germany were suddenly free to leave the factories and farms to which they had been tied for so many years, some for as many as six;” Julie Frances Gilmour, “The Kind of People Canada Wants”: Canada and the Displaced Persons, 1943-1953, Phd. thesis, University of Toronto, 2009, page 121.