Mennonites got over their snit against Bartsch and Höppner, the two curmudgeons that landed them in this strange and cruel world, and went straight to work. They had to devise a system of land distribution and some sort of internal government. Did they consider separating the functions of church and state? You can probably guess the answer.

To understand what happened to the Mennonites in the one hundred years since their arrival in Russia keep in mind the dynamics which shaped the rise and fall of Mennonite wealth and influence. Internationally, Mennonite leaders failed to recognize Russia may view Germany as a potential rival and view the existence of millions of ethnic Germans within its borders as a security risk. German Prussia defeated the French in 1871 and was now the dominant power in Europe. What would happen if Prussia expressed eastern ambitions?

Nationally Mennonite leaders might have paid more attention to the social changes taking place around them. Russia’s stinging defeat in the Crimean war eroded the Tsar’s power and the snowball of social chaos began to roll. Instead of responding to the changing world around them, Mennonites saw only economic opportunity.

Internally, Mennonite leaders should have taken an ethical gut-check to see whether their treatment of their own people and those around them still adhered to the principles of their namesake Menno Simons, not to mention the biblical ideals such as 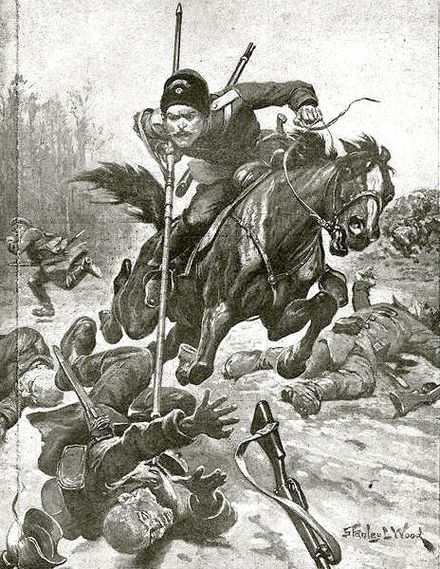 loving your neighbours and the meek inheriting the earth. Mennonites viewed the Russian and Ukrainian peasants as dishonest and lazy, perhaps forgetting that many of their neighbours had descended from proud Cossacks and displaced Nogai.

By the time Gerhard came along, Mennonitism in Russia was already dying, but let’s not get ahead of ourselves. There were the good times, when Mennonites were welcomed with open arms by the reigning autocrat.

To oversee this rapid influx of German immigrants to the Russian hinterland the tsar established a separate government department known as the Guardians Committee for Foreign Settlers to New Russia. The head of the Guardians Committee reported directly to the tsar and as a result the German farmers had no direct contact with the Russian district and rural governments already in place.[1] When you have a pipeline to the tsar, you don’t need to worry about your neighbours. This would be a privilege many would come to regret. The head of the Guardians Committee decided any dispute between the immigrants and the native Russians, often with brutal and tragic results.

Mennonites established a colony of eight closed communities along the banks of the Dnepr River across from the city of Zaporizhia (formerly Alexandrovsk) and named it after the largest island in the river, Khortitsa. Russian immigration policy encouraged villages to be established on the basis of the inhabitants’ religious beliefs. Baptist villages would be filled with Baptists, Lutheran villages with Lutherans, and Mennonite villages  with Mennonites. 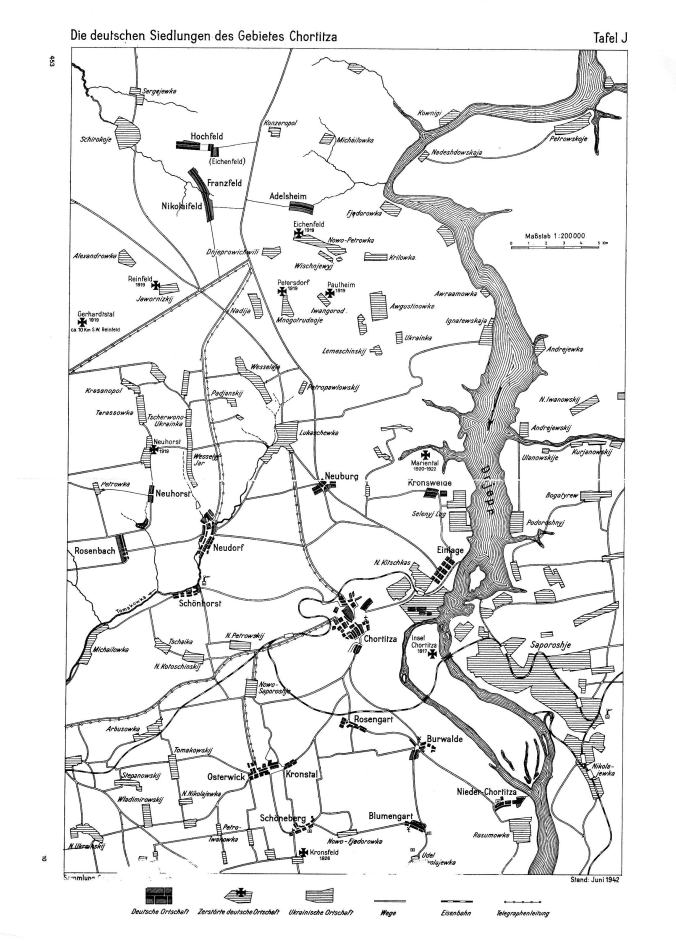 Each German village was led by a mayor, called the schulze, elected for a two year term by the male landowners of the village. He was assisted by two elected beisitzer (assistants) and a clerk. In turn, the mayors were responsible to the oberschulze (regional mayor) who administered the entire district from the Gebietsamt (regional office). “He was responsible for all meetings and for the maintenance of peace and order and exercised police power in the district, and imposed sentences, such as fines, incarcerations, or public labor, but only with the consent of the local schulze. With the consent of the Guardians’ Committee he could even inflict corporal punishment.”[2]

To provide religious authority and order, Mennonites brought with them their traditional Lehramt (teaching office) consisting of an elected Elder (Ältester), assisted by Ministers (Lehrer) and Deacons (Diakonen). Since these positions were unpaid, they were filled with men who could afford to work for free. This means the civil authorities and the religious authorities were often one and the same.

The land was distributed as follows:

Each Mennonite colonist received a separate allotment of 65 desiatinas  (175 acres; 70 hectares) which they and their descendants could use in perpetuity. This allotment could not be subdivided, but, while the 1764 law specified that only the youngest son could inherit the property, Mennonites, through provisions granted in their 1800 Privilegium (Charter), could follow their own inheritance customs. Usually the eldest Mennonite son inherited the land and homestead, but he had to compensate his siblings for their portion of the estate.

Each allotment included areas of arable, meadow, pasture, and, if available, woodland. Also included was the house and garden plot of 1.5 desiatinas (4 acres). The colony retained rights over wasteland, rivers and lakes; the rest of the land was divided into village areas. At the time of settlement one sixth of the village land was set aside for future population increase (the surplus land) and a further area in the colony to establish new villages (the reserve land) once the surplus land was exhausted. A smaller area was reserved in the villages for the households of those who did not require farm land but who wished to pursue a craft or trade.[3]

Most of the first settlers were not farmers, but crafts-men and -women, and it took several years before farming became the major source of income. They were carpenters, joiners, weavers, blacksmiths, tailors, shoemakers, millers and brewers. The Russian government had assigned these colonists nearly 90,000 acres, but the settlements had not yet morphed into farming communities, so much of the land was not cultivated but used for sheep grazing. In 1797 another 180 families arrived and several more villages were established.

In 1804 another 162 families settled another group of villages 100 kilometres south of Khortitsa along the Molochnaya River. This colony, known as Molochna, was to become the largest and richest of all the Mennonite colonies in New Russia. By 1804 the wealthier discontents from Prussia saw opportunity in Ukraine, and gladly paid the ten per cent emigration tax to start anew. Over the next 80 years Mennonite colonists continued to arrive until a total of 1,887 families had made the 2,000 kilometre journey to New Russia.[4] 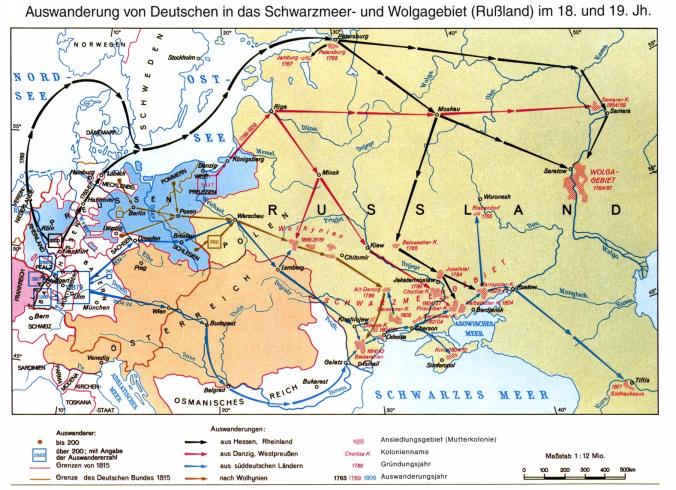 Migration routes to the Black Sea and the Volga districts.

When the colonists first arrived at Khortitsa and Molochna they were faced with a vast landscape supposedly devoid of civilization. But no land is ever empty. In fact, this land may never have been empty. The earliest residents are credited by many archaeologists and philologists with the domestication of the horse and the invention of the chariot. All European languages and many of Arab and Indian languages were incubated on the Ukrainian steppes where Gerhard was born. 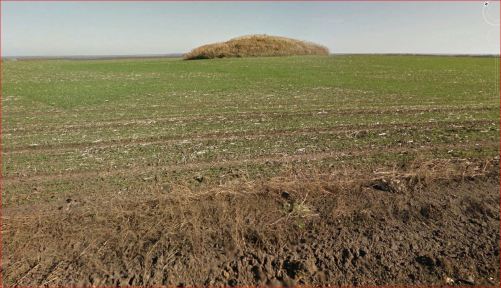 Google Streetview snippet of a kurgan.

Google Earth view of kurgans from above.

Prior to the arrival of the immigrants this land had been the home range of the nomadic Nogai peoples who ranged north in the spring with their cattle and horses and planted wheat along the river banks to be harvested upon their return in the Fall. They buried their dead warriors and nobles in large earthen mounds called kurgans, some up to 20 metres tall with intricate internal structures. It is said of the 500,000 kurgans in Ukraine, less than ten per cent remain intact. Their ecological value in preserving indigenous plant species is now being recognized in addition to their archaeological value. The foreign settlers who first tilled this soil plowed their way around these mounds thus protecting a small sample of the plants that once grew wild on the steppe.[5]

Not that Tsar Catherine cared. She wanted a stable non-Muslim population and cleared out the Nogai, resettling 120,000 to the Kuban and Caucasus regions in the 1770’s and 80’s; but now 30 years later, they were returning to their traditional lands. The area was also home to Cossack remnants of the Don and Dnepr rivers as well as dissident Dukhobors and Molokans, not to mention, if fugitives and thieves wanted to get away from it all, this was the sort of place they came to hide.

[Before 1825] …relations between Nogais and Mennonites had been strained. The first encounter between the two groups came in 1803 when the state evicted five Nogai villages from prime sites along the banks of the Molochna River to make way for the first Mennonite immigrants. Chief Baiazet Bey from the Yedissan Horde that ranged along the Molotchna complained to the local governor: “Who will pay for the houses they have built? . . . Who will pay for the . . . grain that stands in the fields of the places they have left?” Nogai raids on Mennonite herds were a constant problem in the first two decades of settlement, and in 1811 four Mennonites were murdered by Nogais, leading the state to disarm all Nogais two years later.[6]

When the Mennonites complained of Nogai raids or thefts, government officials indiscriminately punished and killed the suspects without due process.[7] 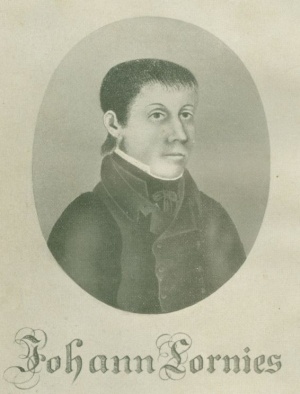 Johann Cornies believed it was better to raise up the Nogai from their backward ways than to subdue them with force. He was the ultimate Mennonite renaissance man importing breeding stock, introducing new agricultural processes such as summer fallowing and four-crop rotation, irrigation, encouraging the planting of millions of trees on the steppe to hold the soil and water, founding a library and a reading circle and creating a modern school system. In addition he designed a number of model villages for the local Russians, Ukrainians, Nogai and Cossacks:

He composed a set of instructions comprising thirty-five articles that defined every aspect of the village’s construction and administration. Houses were to be “precisely” aligned along both sides of a single street, “exactly” aligned with the house on the opposite side of the street, “exactly” four sazhens (about 8.5 meters) from neighboring houses, with a surrounding ditch “exactly” two arshins (about 1.4 meters) wide and 1.5 arshins deep, each yard divided into corrals, gardens, threshing yards and courtyards by ditches “exactly” 1.75 arshins wide and 1.25 arshins deep, each with a single gate “exactly” centered on the property, and so on. Rules of conduct ranged from procedures for filing a complaint with the village elder to the injunction: “it is strictly forbidden for anyone to enter or exit the yard from the street by stepping over the ditches, and everyone must enter and exit in the proper manner, through the gates, and children must not go into the ditches, so that the ditches will not become filled in.”[8] 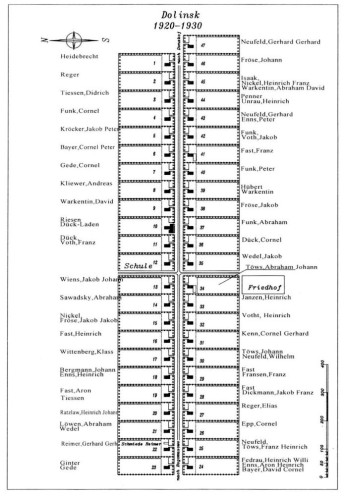 To many he was the Mennonite tsar. The Imperial tsar loved the idea of the model villages so much he made Cornies the most important intermediary with the Russian government. Whatever Cornies decreed had the effect of law in the colonies. The truth about the model villages is they were only a marginal improvement, and only a few were ever built.