At a time when the ground rules of life were shifting constantly, Gerhard tried to live the life he had dreamed of. He wanted an education and he wanted to be a teacher. Through the tumult of the civil war, Gerhard completed seven years of school and was ready to move on. With his father’s support he applied for and was accepted to the teacher training college in Khortitsa, Ukraine. This school was established in 1840, and when Gerhard attended it was a highly sought after institution; fewer than half of applicants  were accepted. 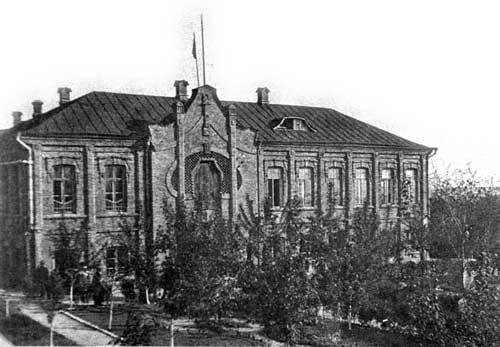 Mennonites like to perpetrate the myth they, as a distinct people, are victims in the story; a quiet, simple people, either innocently caught up in events beyond their understanding or persecuted on account of their faith. As gently as possible, historian James Urry denies them victim status:

Where Mennonites have chosen to become active participants in the wider world, to exploit its advantages while demanding special privileges, to claim rights and identities beyond those of freedom of religion, they have exposed themselves to the danger of persecution on grounds other than faith. During the Imperial era Russian Mennonites sought and achieved communal prosperity and particular privilege in a land where these gave them unequal advantages over much of the population. When this way of life was challenged by new forces, the Mennonites discovered that their own social and cultural order, as well as their faith, was put to the test. These forces included the destructive powers unleashed by war, revolution and anarchy, and also the plans of the new Soviet regime committed to a new social and political order which would remove Mennonite privileges and claims to cultural autonomy.[1]

As individuals, people are judged by their actions and collectively a people is judged by the actions of its leaders. Mennonite leaders, tested by chaos and anarchy, driven by greed and fear, failed the test of pacifism even before establishing a communal armed force. They exploited their own people and their neighbours in commerce and industry and were active in local, provincial and national politics. No longer could they peddle the fiction of being innocent observers – they had become players. And now they were swimming upstream against an endless river of consequences which followed for all remaining Mennonites in Russia. Certainly individual Mennonites were victims, but they were victims of their leaders, their own greed and their own failure to honour the creed of Menno Simons.

Gerhard too was a victim. His hopes for an education were gone and it was time to join the gray masses of factory workers in the city. Going home was not an option: how awkward it would have been – his father had given him everything, and Gerhard had nothing to show for it.

Gerhard’s dream of an education was over; he was nineteen years old, questioning his future. Surely it had to be better. From Varvarovka [48°4’56.13″N, 34°53’5.17″E] the train took him through Khortitsa, the original Mennonite colony, south to the Black Sea at Melitopol, Berdyansk, Mariupol to Taganrog and then to Rostov, the largest city in the Don basin, where he stayed at a friend’s sister’s house.[2]

For ten months he worked in a factory which produced agricultural equipment. In cities across the country workers were forming soviets, worker-oriented councils, which took charge of factories and were desperate to show positive results, although Gerhard’s view was less positive.

Early in 1931 Gerhard returned to his village for a visit. His father was working in the collective farm on land he once owned. Gerhard’s mother Lena had four children under the age of 13, the youngest, Sonja, was just five. In spite of his dire straits, he considered himself lucky, and as luck would have it, an opportunity appeared. The village teacher told him there was a shortage of German-speaking teachers.

In a country where compulsory education was unheard of, Mennonite children had always been required to learn to read and write; sixteen thousand children attended 450 Mennonite elementary schools. Although the government had decreed that the language of instruction was to be Russian, in Gerhard’s region teachers still taught in German.

He did not elaborate on the illegal papers and went along with the plan. But Gerhard had a bigger problem – his girlfriend’s parents were moving back to Germany, and she  (Miss Treu)[3]  was going too. They were likely headed for marriage and he could have asked her to stay, but his situation was too unsettled: he had exams to write and he was the son of a kulak. 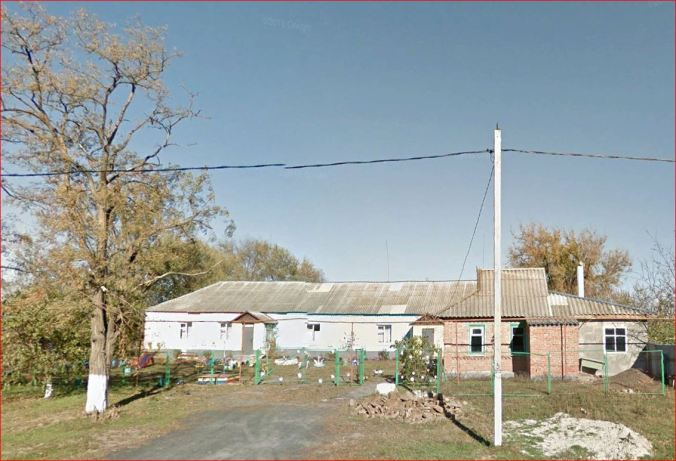 Based on my Google Earth observations, this is the place Gerhard taught his first pupils.On the street there is a children crossing sign and a crosswalk.

Neuhof [currently Novikovka, 47°44’38.37″N, 39° 4’53.32″E], was an evangelical German village and is about ten kilometers north of Nikolaipol. After the initial year Gerhard had intended to continue his own education but because of the teacher shortage, he was reassigned to teach four classes in a smaller village called Johannesfeld [47°16’16.70″N, 38°43’12.45″E] where he had 30 students. He was given a horse and buggy to travel to his new school. Before he left he went to Nikolaipol to say goodbye to his family.

Enteritis is an inflammation of the small intestine and is caused by consuming contaminated food and water. You can also get it by contact with infected people or animals. Whatever the cause, Gerhard’s mother caught the disease and died less than two months later. Gerhard likely saved his sister Katja’s life during the famine of 1932-33 even though the rations he received as a school teacher were among the lowest of the four categories of ration cards, likely receiving only 200 grams of bread per day.

[1] Urry, James, After the Rooster Crowed – Some issues concerning the interpretation of Mennonite/Bolshevik relations during the early Soviet period,  Journal of Mennonite Studies, Vol 13, 1995, page 43.

[2] This was Rudi Sakschewski’s sister.

[3] Gerhard never revealed the name of his girlfriend and identified her only as Peter Treu’s sister.