In Russia Menno Simons’ vision of equality among church members and a consensus community had disappeared.

The first groups of settlers to arrive in Russia were the poorest of the Mennonites in Prussia. They had run out of available land and their ability to buy more land was restricted by the Prussian government. The Prussian government on the other hand was happy to be rid of them. They were not an economic asset and would  be reluctant soldiers at best. So the first groups of families left in 1789 in answer to the tsar’s offer to immigrants.

The second wave of Mennonite settlers to Russia was a different kettle of fish. Thirteen years later, wealthy Mennonites of the Vistula lowlands  were also feeling the pinch. They owned large tracts of rich farmland and they were being forced to render military service proportionate to their holdings. And worse, they could not buy any more land. Now paying a tax which funded the Prussian military college was not enough. These settlers were willing to pay a ten per cent tax on all their assets for the privilege of starting over in southern Ukraine.

When they arrived, just to make sure the new tsar was serious about his offer of free land and self-government, a delegation to Moscow asked Paul I to put it in writing and he did so in a document known as the Privilegium, Mennonites’ charter of privileges. Much can be learned about the character of a people when given nearly absolute liberty to manage their own affairs. How will they govern themselves? Will they be a just society?

When it came to land ownership, only two significant constraints bound them, one imposed by the tsar and one imposed by the Mennonites themselves, and both would cause turmoil in the community and contribute to its disintegration. The most important constraint imposed by the tsar was that the free land could never be subdivided, it would have to be passed from generation to generation intact. Although the Russian law required the land be passed to the youngest male heir, the tsar permitted the Mennonite tradition of passing it to the eldest.

One would not have to look too far into the future to see this policy would be problematic in a generation or two. Children would be born – large families were the norm – but only one child could inherit the farm. What would the others do?

In 1817 Mennonites received the right to buy land on the open market, and many of the newcomers did just that. But in the early years times were tough and most could not afford to buy more land so families looked after themselves on their free 70 hectares. And continued to have children.

Colony planners had ostensibly considered this issue and planned for it. Large portions of the free land grant to the colony was set aside as a reserve for communal grazing and future expansion. It was the second constraint, however, that undermined this plan.

The second constraint, imposed by Mennonites themselves, was that only landowners could vote in community matters. When a new mayor (schulze) was elected, only the landowners had a vote; a new preacher (Ältester), landowners would make the choice. Preachers, deacons and elders were all unpaid positions, so these positions were filled with landowners who could afford to work for free. This system functioned well when everyone in the community owned land, but as the landowners dwindled into the minority, it is easy to see the problem. Before long, everything in the colony was controlled by the minority who owned land.

During the early years most Mennonites in Russia could depend on their large families to provide all the necessary labour. In succeeding generations those who had not inherited land were given access to a generous plot of land on a landowner’s property. Here they could build a house, plant a garden and perhaps even grow some grain. Such live-in workers were called Anwohner (adjunct residents). In exchange for these privileges the able-bodied members of these families worked for the landholder, who usually paid them in kind. On the whole it was a satisfactory arrangement for both parties. They all prospered.[1] 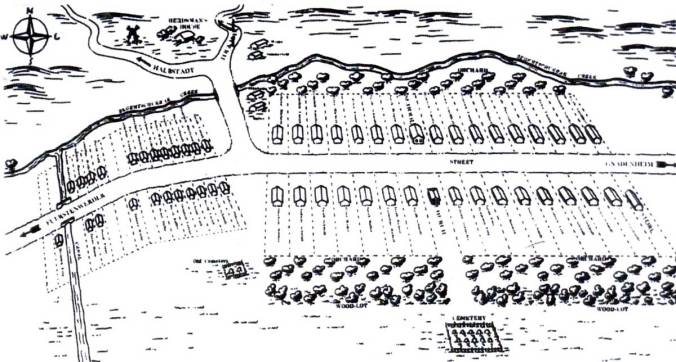 Anwohners at the edge of town.

As the number of Anwohner increased the landowner’s property became crowded and soon they were forced to live on tiny lots at the edge of the village in Armenreihe (poverty row). These were called Einwohner (renters) or Kleinhausler (little house people). The Einwohner were destined to a life of labour in the service of the landowners with little opportunity for advancement.

Instead of a tax based on landholdings, the Mennonites imposed a head tax – the more adults in the family, the higher the taxes. Landless families with many children would pay more than a landowner with fewer.

It was not easy to change this system because it was against the Mennonite law to disagree with the civic authorities. In fact, Molochna colony created a new “sin” for disagreeing with their authorities. A person who complained would be labelled a troublemaker or worse, a revolutionary, and risked being shunned or banned. The disgruntled landless tried to escape the moral and ethical bankruptcy of the Mennonite Church by forming their own church only to be denounced to the Russian authorities by landowners and clergy alike.

Jacob Janzen’s father had joined an alternative believers’ group and was called to recant his mistakes. When he refused his clothes were ripped from his body and he was given ten lashes with a six-piece switch and left in an unheated room for two days. A landowner came by and threw in a wooden block and said there now you have something to sit on. But Janzen’s father couldn’t sit down, he was beaten so badly.[2]

Mennonite leaders hated this new movement mainly because it came from the Pietists within the Baptist and Lutheran churches. Pietism is a movement within Christianity that attempts to focus on individual holiness and a consistent Christian life.[3] These new Mennonites were called Mennonite Brethren and they rebelled against the old school church which had become the de facto Mennonite state church.

Isaak Matthies also found out the hard way when he was shunned for worshipping with the Mennonite Brethren. Now those who owed him money were excused from their debts, at a cost of 30,000 rubles. However he was required to pay all his existing debts, and when all was said and done, he was ruined. His business and home were sold at debtor’s auction.[4]

If this kind of justice was not to your liking and you wanted to leave the village or colony, a passport was required. It’s not hard to guess who held all the passports. Even if given permission to leave, you were required to pay five years’ taxes in advance.

Abraham Thiessen complained about the system but he did receive a passport–to exile in Siberia when Siberia was still considered a hostile frontier.

Russia’s feudal environment suited the Mennonites well because it provided a cheap source of labour; in fact Mennonites intentionally created this serf-like class of labourers among their own people by denying the landless a voice in community affairs.

As more land was brought into cultivation in the Mennonite colonies and demand for labour increased, the interests of some landowners in keeping a pool of cheap, local Mennonite labour available meant also denying their Mennonite workers land and keeping them subservient.[5]

“Already by 1834 almost half of all Mennonite families were landless, and by 1860, nearly two-thirds were without land.”[6] The problem was not shortage of land,  but that it was under the control of existing landowners. The reserve land, the communal pastures and the road allowances were not sitting idle. In Molochna a landowner named Klassen rented 3,200 hectares of communal land to raise sheep and to build a textile mill to process the wool. For appearance’s sake the mill was built, but the land itself was rented out to the landless for ten times the rent Klassen paid. Children of landowners also found land was available to rent inexpensively while unrelated landless people paid exorbitant rates.

The Odessa Zeitung (2 April 1865) provides a revealing vignette about the landholders’ attitude toward the landless. The mayor-in-chief wanted to make a public announcement. In order to have sufficient citizen witnesses he sent a young landholder out to call together all of the people who might be within the vicinity of the Oberschulze’s office. However, the young landholder returned shortly to report there were no menschen (people) out there, just a few Kleinhäusler (landless persons).[7]

As employers, Mennonites were different from Russian nobles in only one aspect – they worked alongside their employees in the field. Otherwise they treated Russian peasants “…as serfs , if not slaves…”[8]

Many of these landless Mennonites would have drifted to other colonies or to Russian cities, but the gebietsamt (regional office) controlled the required travel documents, and refused to issue any because it wanted to prevent loss of cheap Mennonite labor.

It is clear that many Mennonite landholders used their economic and political power to develop a stratified society which compromised Menno’s [Menno Simons] view of stewardship in community as well as equality and brotherhood in the church. This their official confession of faith could never condone, because it called for a community in which all members were equal in status and in which all shared equally in the returns from everyone’s labors[9],[10].

Despite the fact that the landless had outnumbered the landed for 25 years, it took the complaints of 150 Molochna residents to the Guardians Committee to finally see progress. “About 1865 there were in the Molochna 1,384 landed families and 2,356 landless families (of whom 1,063 were Anwohner); besides these about 490 families were living on farms, owned or rented, outside the villages and in towns.”[11]

The “resolution” that overcame the worst of the land crisis was achieved more through the intervention of the Russian state and “secular” Mennonites than through the actions of religious leaders. It was also secured through legal and bureaucratic changes that enforced collective responsibility upon all Mennonites through a scheme where funds raised through taxes and rents were used to purchase new land for future population increases. It was not realized through an appeal to religiously informed ideas of “mutual aid.”[12]

As a result of the government involvement in settling the landless question new colonies were established and now half-farms (80 acres or 35 hectares) and quarter-farms were also permitted. As landowners, Anwohners left their villages to begin new villages elsewhere in Russia. Now they received a vote in community affairs. The colony also established a tax of pennies per acre to purchase new lands for new daughter colonies. The mile-wide road allowances were cut in half and the land rented out, and these proceeds also went into the future purchase of new land. Kleinhäuslers were still out of luck and received nothing. In addition, a special poll tax was established to provide a fund for future communal land purchases as required. Resolving the landless issue by forcing government intervention left a deep wound and was surely one of the motivating factors of the Mennonites next great migration.

The farm Gerhard was born to was 32.5 hectares, but it is unlikely to have been a part of the 1866 land settlements because Nikolaipol was located well away from any Mennonite colony. Perhaps an ancestor had purchased land and moved from the colony.

[5]Urry, James, Context, Cause and Consequence in Understanding the Molochna Land Crisis: A Reply to John Staples, Mennonite Life, Fall 2007, Vol. 62 No. 2

6 thoughts on “Ep. 10 The dream begins to unravel”